View photos from the Mopar Euro Nationals 2018 on the Facebook Photo Gallery. 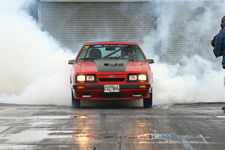 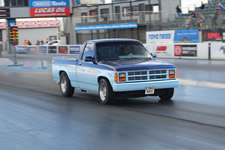 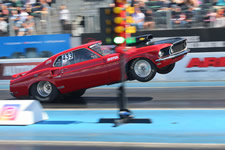 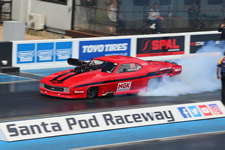 Well, I guess it had to happen sometime this summer for a major American car show to fall foul to more like typical British summer conditions then we have expected and that’s exactly what transpired at this year’s MoparEuroNats.

The beauty of this show is that it encompasses three days so if the weather turns foul then it is highly unlikely to wash away all the activities. As it turned out, Sunday took the full force of persistent rain, low cloud and gloom, however not only did the trophy ceremony go ahead so did the Incredible Burn-Out Contest with Andy Bozwell adjudged to be Burn-Out King of 2018, up against very stiff competition and a damp start-line the Boz took the win.

Friday at the EuroNats is always a very laid-back affair as folks settle in to the show, pitching tents, positioning caravans and preparing their cars for the midday opening of the drag strip, delighted to see so many RWYB cars partaking. With the track closing at 7pm the participants get to cruise their rides to nearby Billing Mill, park up by the side of a lake and enjoy the hospitality and petrol head banter. The day closes with a live band back at the track bar, this year saw local combo Neon Valley perform a highly enjoyable set.

Saturday gets really serious with the Pro-Mod cars out on the quarter mile, supported by the ever-popular Nostalgia Super Stock series and the Gasser Circus amid more RWYB candidates. Fine weather brought early Show n Shiners out to the car corral celebrating the 1968 models as of their 50th anniversary. This year’s event saw the return of the Wheels-Up contest which captivated the Saturday night crowd with muscle cars reaching for the sky at any opportunity, the bragging rights falling to a very well-deserved Mike Lacey in his 1967 Camaro.  When the racing stopped, the evening entertainment took over with The Mighty Toodle and the Pips rocking the bar area with a very loud set of rock classics.

Sunday’s rain affected trophy presentation helped raise the crowd’s spirits as larger than life Mopar aficionado Andy Robinson scooped Best in Show and another two awards for his immaculate Dodge Daytona recreation that not only scrubs up pretty well but the mighty Hemi 4-speed also thunders up the 1320 in 13.5 secs!

Jim Wilson aided by ace commentator Graham Beckwith dished out the trophies to the deserved winners in the absence of regular Mopar celebrity Sylvia Hauser.

Fastest Mopar of the weekend went to Dutchman Michael Tooren in a 1971 Cuda bodied Pro Mod that achieved a blistering 6.072 secs.
Classic American “car of the year “heat winner was claimed by Steve Henry and his gorgeous 1969 COPO Camaro.

The MoparEuronats might not be the biggest show to roll into Santa Pod annually but it has a devoted hard-core enthusiast following that see the weekend as much more than a soiree of muscle cars, its three days of Mopar mayhem, long may it continue in its current form.

Thanks to everyone who attended, you the best!